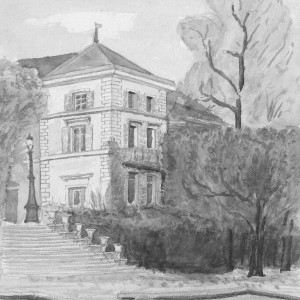 Monika and I are in good health and good mood. Of course, we both retired a long time ago – Monika in 2004 and I myself as early as 2000. It is incredible how quickly time passes! We try to make our short German summer longer by a little trick: In September and October, we always stay for some weeks on the Greek island Syros, swimming every morning before breakfast in the sea. During the years of 2013, 2014 and 2015 we regularly spent two months at Tsinghua University, Beijing. There we edited the „Foreign Language Notes“ by the famous Chinese writer and scholar Qian Zhongshu (1910–1998). He has left 211 notebooks in seven languages. They cover such fields as philosophy, linguistics, literature, literary criticism, theories of literature, psychology, anthropology, among others. We worked in the University’s record-office, arranging the often scattered materials for publication and compiling indices as well as writing introductory articles. The notebooks were published by the Shanghai Commercial Press in 49 volumes with 500 to 700 pages each, with an index for each volume and a General Index in the last volume. Qian was polyglot and took his notes in English, French, German, Italian, Spanish, Latin and Greek. Thus, I could participate in this fascinating work. For the first time in our life Monika and I were being engaged in a joint research adventure. (for further details see homepage  monikamotsch.de: „Qian Zhongshus and Yang Jiang“)

Here at Bonn I always feel that I spend too much time reading the daily newspaper (Süddeutsche Zeitung). When we are in Greece on the little island Syros, we fortunately have no daily newspaper. So I can use my time more creatively, drawing and painting or putting family papers or my own notes into order. Thus, I transcribed the letters of my father from the old German handwriting into normal writing. I started with his war letters from the Second World War („Feldpost 1939-1943“, 2014, 249 pages) and I continued with his correspondence as a schoolboy during the First World War and as a student up to 1924. The whole work covers the years 1900 – 1924 („Jahrgang 1900“, 2015, 540 pages).

My mother was a paintress and left us a great number of her paintings. My niece, Susanne Zouyène, who is an artist and photographer, helps me to make a catalogue of her paintings by taking digital photos and adding brief descriptions. This work led me to the compilation of another booklet: „Texte über Gott und die Welt, vermischt mit Bildern von Mechthild Motsch von Freydorf“ (2017, 97 pages). Another tiny booklet I just finished is: „Monika and Richard wandern in Cornwall im März 1984 auf dem South Costal Footpath (2017, 19 pages). All booklets are available here on my web site.

Today I read in the Süddeutsche Zeitung Magazin (Nr. 24/16. Juni 2017) an interview with Ruth Klüger (85). She was born in Vienna, deported as a child of 11 years to the German concentration camps (Theresienstadt, Auschwitz-Birkenau, Groß-Rosen), survived and became a Professor of Literature at Princeton. At the end of the interview she comments on the provocative sentence of the psychoanalist Zvi Rex that Germans will never forgive the Jews Auschwitz. She says: „Yet the German postwar generation and the emigrant policy of the Merkel-government contradict this cynicism. That’s to say: the analysis of the Nazi period was clarifying and has produced positive effects.“

Let me jump back to pacifism. In July 1906 the London Inter-parliamentary Conference on Peace took place with 500 participants from all over Europe and the United States. The British Prime Minister, Sir Henry Campbell-Bannerman welcomed them with a remarkable speech. In his reply the Hungarian Albert Graf Apponyi [1] (1846–1933) called the speech a historical event.

Let me just cite some words from Bannerman’s speech:

„You have indeed done much since the new century began to give shape and substance to the growing, the instant desire that war may be banished from the earth. All of us can remember a time when such a gathering as this would have evoked the derision of those who call themselves practical men. You would have been called dreamers, and your plans for substituting equitable arrangement for the licence and ferocity of war would have been denounced as dangerous quixotry.“

Bannerman then refers to the development of arbitration agreements between the different powers since 1900. [….]

„But, gentlemen, there is a dark side to the shield [….] the world’s armaments. Such change as there has been is for the worse. Judging by the budgets of the great naval and military powers, we might be living in a World where resort to force was the only known method of settling our differences [….] On the one hand, we find the reasoned opinion of Europe declaring itself more and more strongly for peace, and, on the other hand, preparations for war which in their extent and effectiveness suggest that a lust for blood is the actuating principle of modern society. [….] When we ask ourselves whether the object of these preparations is attained, we encounter another paradox. [….] Can any of us say that the result of such overwhelming sacrifices of money, of men, of ideals, and of civil dignity, the sense of security has indeed been attained? Is it not evident that the process of simultaneous and progressive arming defeats its own purpose? Scare answers to scare, and force begets force, until at length it comes to be seen that we are racing one against another after a phantom security which continually vanishes as we approach. [….]

Summing up there is no sufficient ground for optimism neither for pessimism. It is up to ourselves to determine the future. My hope is in the younger generation. For them, I hope and feel, „OneWorld!“ has more appeal than „America first!“ Globalization is not to be stopped, not even by superpowers as USA or China. Let me end with Mahatma Gandhi: All humanity is one undivided and indivisible family! Being confronted with so very many very trying challenges we badly need worldwide solidarity.

I always felt very strongly about the injustice of the Iron Curtain dividing Berlin, Germany und Europe after 1945. The extremely different standards of living in East and West seemed to me a shame. Therefore, in the 90ties a lifelong dream came into existence and I enjoyed the most exciting and trying period of my career as a civil servant, first in the Federal Ministry of Intra-German Affairs and then in the Federal Ministry of Finance. My very last performance as an active servant was to plead at the Federal Constitutional Court at Karlsruhe for the Indemnity Law which was questioned by those who had lost real estates in the GDR without getting proper compensation at the time, and did not get them restituted. We won the case – but this was not the end of it. The plaintives filed a law suit before the European Court for Human Rights at Strasbourg. Being in retirement I was asked again to plead before this court. We won again. So, unexpectedly, the peak of my career came, when I had been already a pensioner for many years.

The present state of Europe and its future Nationalism has caused wars and has done enormous harm to human beings not only in Europe but all over the world. The European Union has banished war here. Above all in this respect the European Union is to be seen as a model for other parts of the world, or, indeed, for the OneWorld. Today in some European countries nationalistic governments are in power and Brexit is a step in this direction. To me this is a relapse. Concerning Europe’s future, it is very hard for me to keep my judgement free from wishful thinking. But I cannot believe that the younger generation will turn their backs on Europe and European unification. To me the outcome of the elections in the Netherlands, in Austria and especially in France are encouraging. And Brexit may not be an attractive model for Poland or Hungary.

Kishore Mahbubani (* 1948 in Singapore) sees Europe from the outside. To him the European Union is a success story only to be compared with ASEAN (Association of Southeast Asian Nations; he writes [2]:

I agree with Mahbubani’s optimism. The process of European integration has to be seen in context with a globalisation that serves everybody and not in the first place the rich Western world and its elites. We may cope with migration only a by worldwide solidarity and effective worldwide cooperation. OneWorld was 1945 the motto for the United Nations as it was the motto of the Olympics at Beijing in 2008!

[1] (Graf Apponyi is the grandfather of Albert Rohan; I found accidencially a report of the speech and thereply of Apponyi in the newspaper which appeared at the birthday of my mother – Karlsruher Zeitung, July 25th, 1906).

[2] Kishore Mahbubani: The Great Convergence. Asia, the West, and the Logic of One World (New York 2014)